The Consumer Protection Unit (CPU) was established in 2011 and functions under the Social Protection Directorate with a view of controlling and monitoring of the quality and standards of imported and export cargo against the existing regulations and standards of the country. It ensures all the Conditional Imports are conform to the required standard and any non compliance goods will be reshipped or destroyed. Consumer and Environmental Protection Unit is the dedicated IPR Office of Sri Lanka Customs for Intellectual Property Rights (IPR) related issues on imports and exports. Any "Action for Application" on Intellectual Property Right infringement will be handled by this unit. This unit also contribute to protect the environment through the enforcement of obligation of international Conventions through collaboration with other related agencies. In addition to Law Enforcement it conducts awareness programmes for Customs staff together with other stake holders. The consumer protection unit always gives priority to health and safety of the people of the country.

The Code of Intellectual Property Act No.52of 1979 was repealed and the Intellectual Property Act No.36 of 2003 was introduced in 2003. Section 207 of the IP Act introduced new section 125 A and 125 B to the Customs Ordinance of Sri Lanka to cater IPR infringements at the boarders. The most interesting fact is that the IP Act No 36 of 2003 is perfectly synchronized with TRIPS agreement of WTO.

Section 101 of the Customs Ordinance was added with a new section Sec. 101(ee) as follows,

101. (1) The Minister may make regulations in respect of any matter required by this Ordinance to be prescribed or in respect of which regulations are required to be made under this Ordinance and in particular for any of the following purposes: -
• (ee) for prohibiting of importation and exportation of counterfeit trade mark goods or pirated copyright goods or any other goods in contravention of the provisions of the Intellectual Property Act, No. 36 of 2003;
Accordingly, a special Government Gazette Notification Extraordinary No.1523/22 of 15.11.2007 was issued by the Finance Minister with 12 Articles and the specimen Application form of requesting to suspend clearance of suspected counterfeit goods. The Articles includes,
♦ Regulations
♦ Condition governing the lodging of an application
♦ Steps to be taken by Customs upon accepting an application
♦ Acts on Customs on its own initiatives (Ex. Officio Power)
♦ Disposal of Counterfeit Trade Mark or Pirated Copyright Goods
A special section was inserted after section 125 of the Customs Ordinance as 125 A and 125 B which empowers Customs to Enforce the Law and continue with legal procedures. More valuable fact is that the Counterfeit Goods are considered as Prohibited Goods as per the new amendment.

Section 125A of the Customs Ordinance

Sections 125 B of the Customs Ordinance

(1) A Right Holder, who has valid grounds to believe that the importation of counterfeit trade mark or pirated copyright goods or of any other goods in contravention of the right holder’s rights under the Act is taking place, may make an application in writing to the Director-General of Customs requiring him to suspend the release of such goods into free circulation.
(2) A Right Holder who makes an application under subsection (1) shall provide adequate evidence to satisfy the Director-General of Customs that there is a prima-facie case of infringement of the right holder’s rights under the Act and supply a sufficiently detailed description of the goods to make them readily recognizable by any officer of the Customs.
The Right Holder should take legal action within 10 working days of the suspension in the Court of Law. Otherwise the goods will be released.
Though the recordation regulations are available in the Customs Ordinance a modified version of recordation is in the final process at Attorney General Department. We are in the final stages of finalizing the regulations for recordation.
A special circular DOPL 627- B was issued on 27.05.2016 to establish an IPR Dedicated Office in the Consumer Protection Unit and now functioning with 05 frontline officers. This was a successful outcome of“Action IPR A/P 1” in 2016.

Intellectual Property Right Law Enforcement is coming under the Consumer Protection Unit and IP office is acting on,
♦ Registering Right Holders at IP dedicated Office which is already registered with the National Intellectual Property Office.(NIPO)
♦ Take action as per the complaint of Right Holder to detain the goods.
♦ Take action on our own to intercept counterfeit goods.
♦ Circulates alert messages inside the department on Counterfeit Goods.
♦ Took part in the "WCO Joint Enforcement Action against Counterfeiting and Piracy in the Asia/Pacific".

A Train the Trainer Workshop for the Joint Enforcement Action against Counterfeiting and Piracy in the Asia Pacific Region and the operation "Action IPR Asia/Pacific” was informed to Sri Lanka Customs on 12.08.2015 by WCO. It was decided by the Director General of Customs -Sri Lanka to take part in the Workshop and the operation "Action IPR. Two Workshop for Customs Officers were conducted by Sri Lanka Customs on IPR-Matters at Customs Head Quarters and a media conference was organized collaboration with American Chamber of Commerce- Sri Lanka on 01st of December 2015.

A Train the Trainer Workshop for the Joint Enforcement Action against Counterfeiting and Piracy in the Asia Pacific Region was held at Holiday Inn, Bangkok-Thailand from 15th to 17th, November 2016.The objective of the Workshop was to conduct a operation on "Counterfeit and Piracy" in the Asia Pacific Region. It was decided to have the Joint Enforcement Action against Counterfeiting and Piracy under the name of "Action IPR A/P 2" from 6th to 2th of February 2017. The products seized in this operation vary from pharmaceutical to automobile parts. As we gave priority to "Health and Safety" toys and mobile charges are given priority. It was revealed that even packaging for counterfeiting also imported from overseas with printed catalogues. As usual almost all the seizures were made from the consignment from China. The seizure of Counterfeited Dietary supplement from India is a remarkable one as it is the first ever seizure of Counterfeited Pharmaceutical product. Also an export of inferior quality Tea also seized during this period where Sri Lanka Pure Tea is having a high reputation of Geographical Indication in the world.

Counterfeiting has been a problem for hundreds of years. In international trade, counterfeiting and piracy are posing an ever- greater threat to the health and safety of consumers, as well as stifling innovation and inflicting huge revenue losses upon countries. As the national guardians at the boarders, Customs plays an indispensable role in combating counterfeiting and piracy. Many Capacity Building programmes are conducted to developed the skills of Customs Officers to fighting against Counterfiet and Piracy. 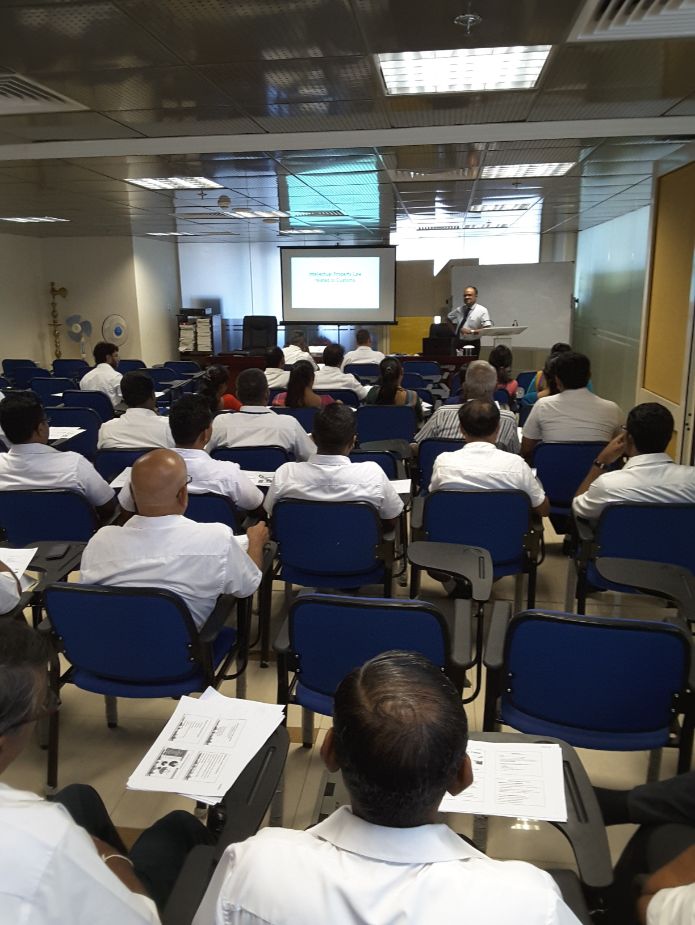 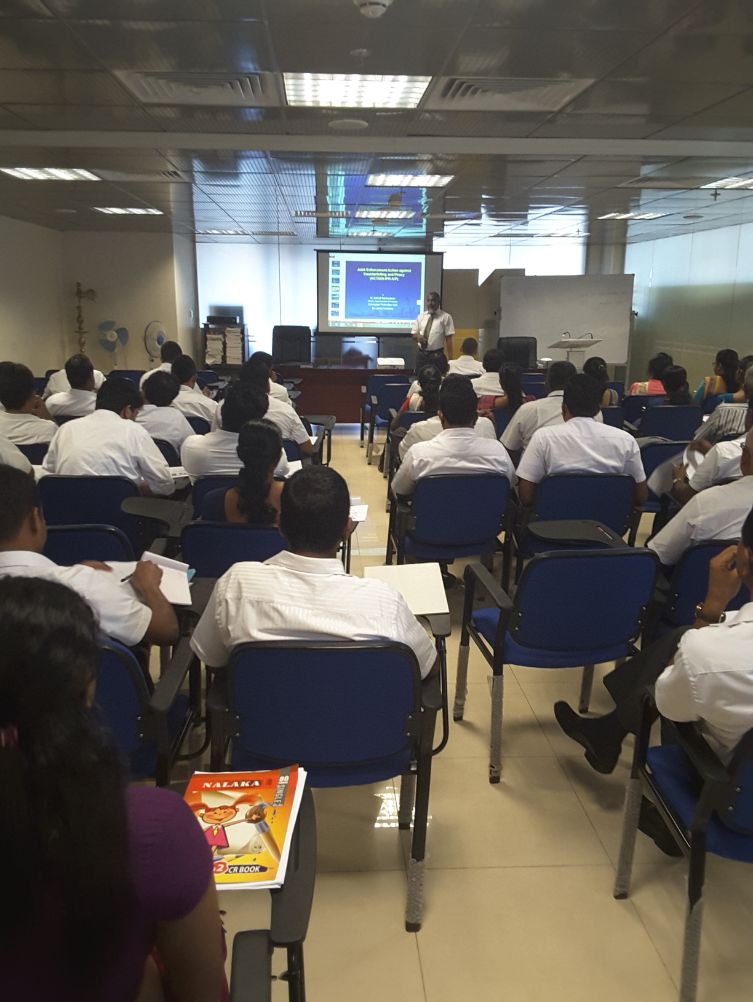 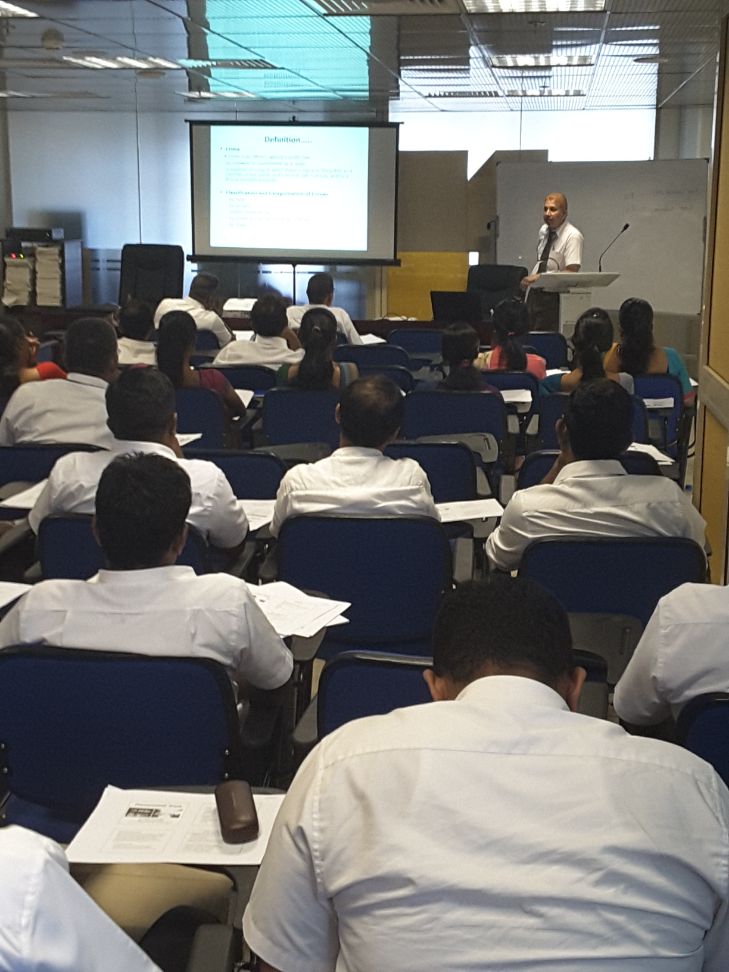 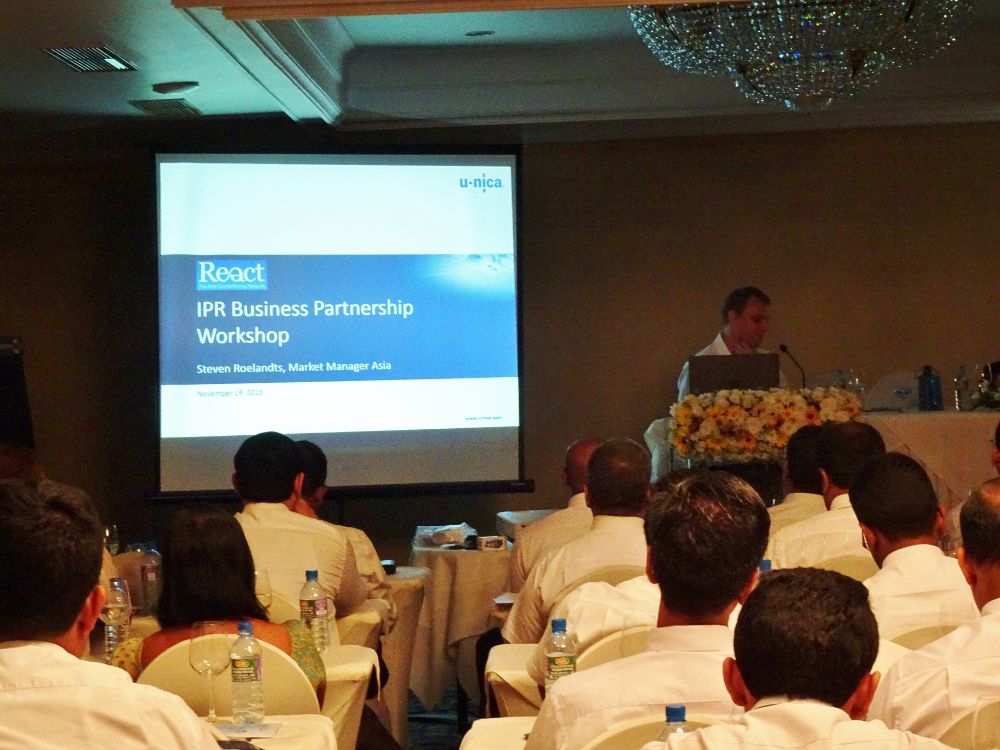 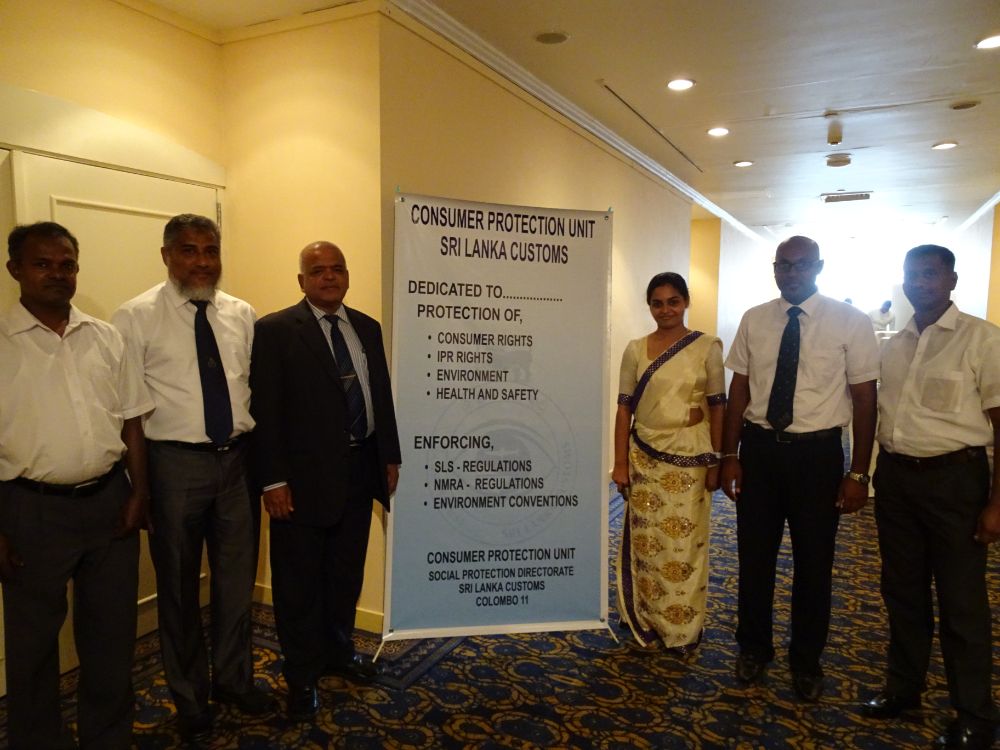 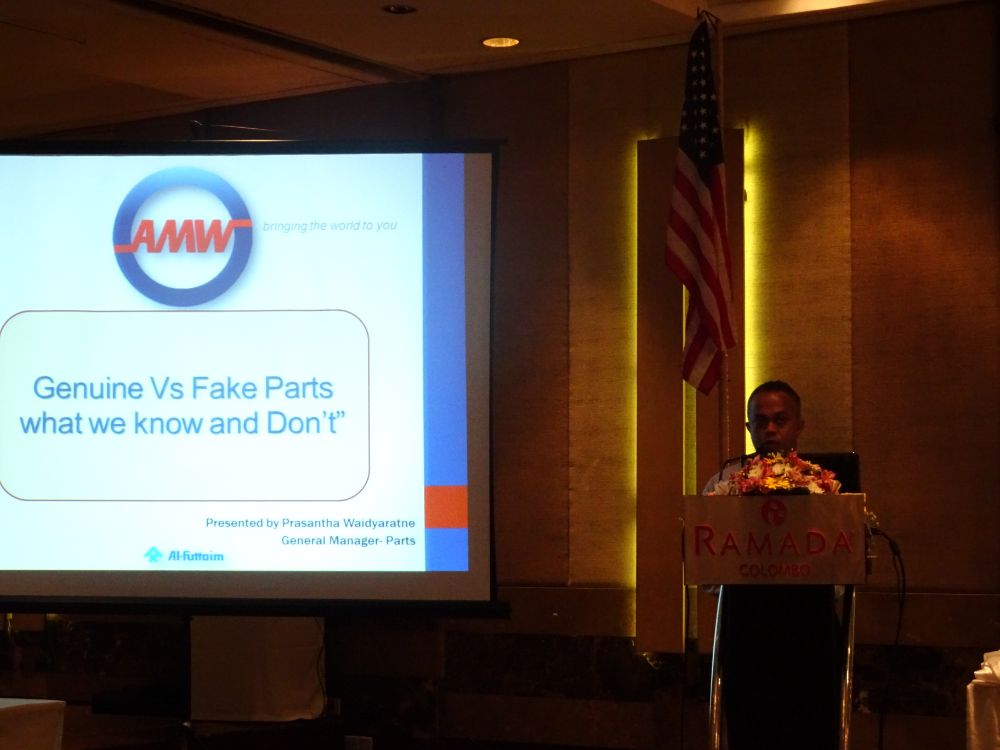 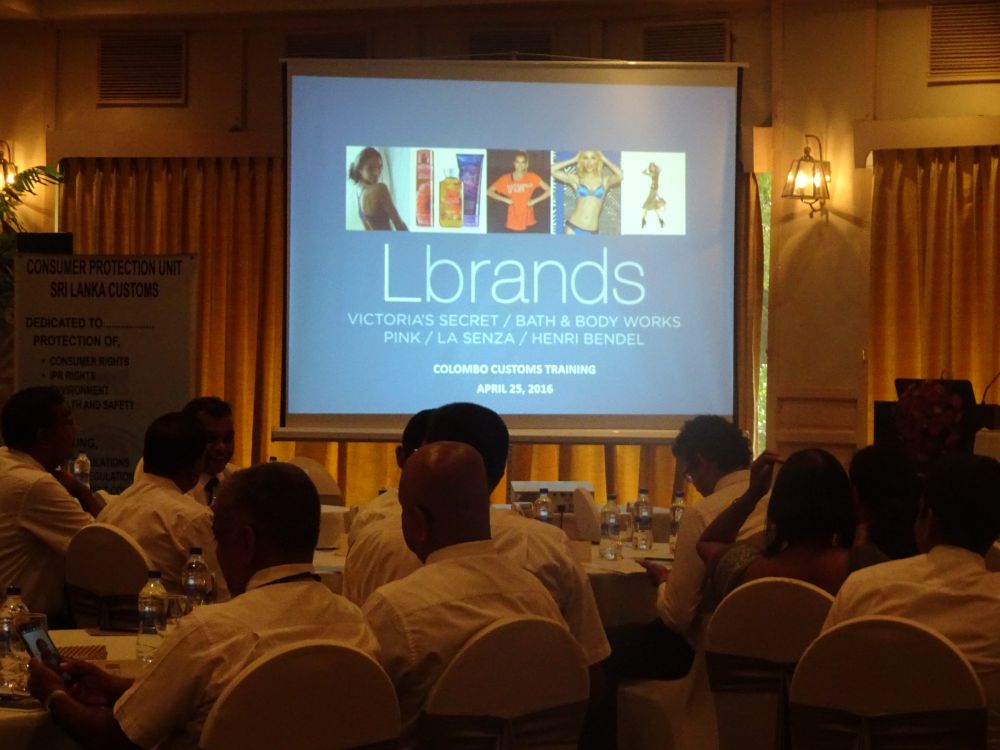 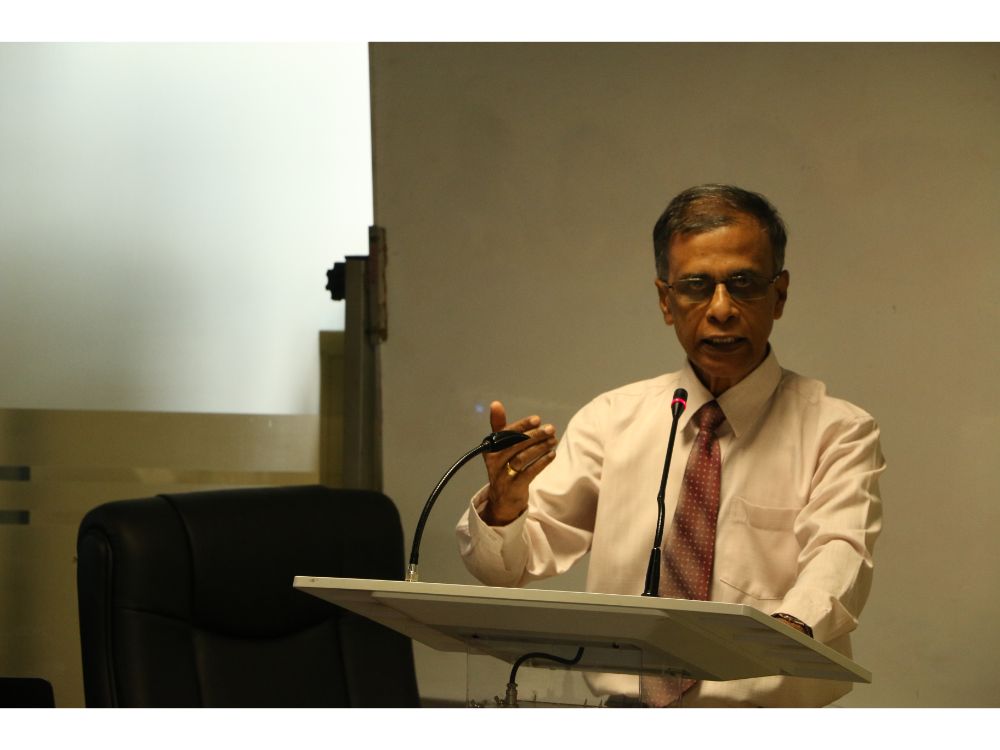 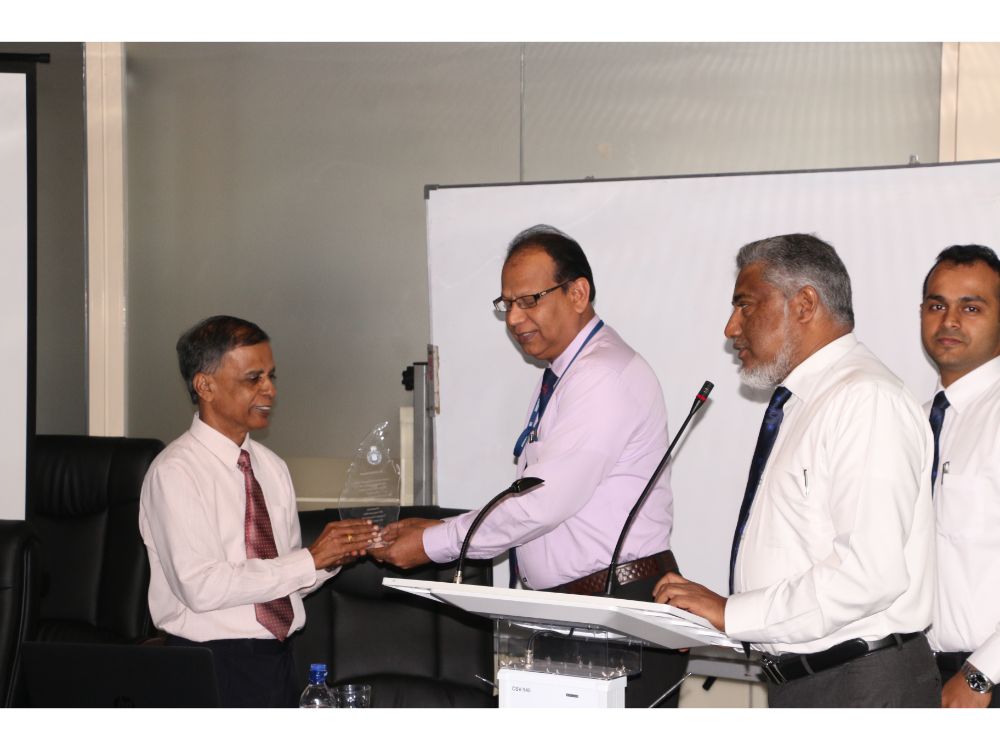 Hands on workshop for Product Identification with “React” Q1. What are the goods coming under SLSI regulation?

As per the SLSI regulation under extra ordinary gazette notification on IPR No 1523/22 of 15/11/2007, 200 goods are coming under SLSI import inspection scheme. (Annexure 2 Laws and Regulations\DOPL627IPR Gazatte.pdf)

Q2. What can we do with SLSI rejected goods?

Q3. How can a right holder register his trademark or patent right with Customs?

The right holder must register his right at National Intellectual Property Office (NIPO) and submit the same along with Customs application form to Consumer Protection Unit for registration.

Q4. Can anyone other than the agent of the brand be allowed to import branded goods?

No, legislation in Sri Lanka restricts the parallel imports of reputed brand. But, the good should be an authentic one and imported through legal channel.

Q5. If any consignment contained any counterfeit good without the knowledge of importer, can it be cleared from Customs after paying applicable duties and other levies?

Counterfeit goods are considered as prohibited goods and it cannot be imported or exported. Whether it is imported knowingly or not, the goods shall be forfeited.

Q6. If any counterfeit goods of a right holder are suspected in a container, how can legal actions can be taken?

The right holder requires to satisfying the Director General of Customs that his rights are violated and on an appropriate assurance the suspected consignment can be detained. Within 10 working days the right holder has to notify the DGC of his legal action. If Importers rights are not violated, the goods will be released to the importer within 10 working days after examination of the goods,

You will be redirected to the Consumer Protection Detections... Click here:

Destruction of Counterfeit and Pirated goods on World IP Day